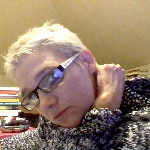 Pauline Clooney is a native of County Laois but has lived in Kildare for over 35 years. Having retired from second level English and history teaching in 2017 after 31 years, Pauline is now a full-time writer and creative writing teacher. She holds an M.Litt on Charlotte Brontë from NUI Maynooth and an MA in Creative Writing from UCD. She is working on her debut novel where the world of amateur drama in Ireland meets the world of Emily Brontë’s Wuthering Heights.

She won the RTE Guide/Penguin Ireland Short Story competition in 2015 with her story Beautiful Things in his Head.

Her story, Shh, appears in the anthology of stories associated with historical houses, Come into the House: Tales of Secrets, History, and Mystery. Pauline’s story deals with the Parsonage in Haworth, home to the Brontës.

In July 2016, Pauline established the Kildare Writing Centre. The centre conducts courses in creative writing throughout the year. It is located in the small village of Athgarvan, three miles from Newbridge town in County Kildare.

Pauline is a professional member and mentor with the Irish Writers Centre in Dublin.